Professor L.W. (Lodi) Nauta is the first philosopher to receive the Spinoza Prize since its introduction in 1996, another reason to celebrate for the laureate. ‘I consider this to be not merely the recognition of my own work, but also of the importance of philosophy and its history.’

It is not the first award Nauta has won: he received two awards for his book about humanist Lorenzo Valla and the Keetje Hodshon Prize issued by the Royal Holland Society of Sciences and Humanities for his dissertation in 2000. Moreover, he is a VIDI and VICI laureate and has been a member of the Royal Netherlands Academy of Arts and Sciences (KNAW) since 2011. ‘But this really is the top prize in the Netherlands. It is unbelievable, and I am extremely grateful.’

Away from the ivory tower

Nauta is not one to stay in his ivory tower. As Dean of his faculty, he believes in promoting his own work and philosophy in general. Thus, he is a regular speaker at events such as the Dutch Philosophy Night. However, promoting philosophy primarily takes place in tutorials and lecture halls, and sound research flourishes wherever there is good education. ‘I find it enormously stimulating to teach students to think critically. Reflection and analysis are crucial elements in this process. The history of philosophy is very important too: it is the philosopher’s laboratory. Notions about free will, God, good and evil, knowledge, language and thought do not arise in a vacuum. We are standing on the shoulders of giants. Showing both the wealth and relevance of our intellectual heritage is at the heart of my teaching.’

‘This really is the top prize in the Netherlands.’

New views through combination of source study and philosophical analysis

Nauta’s research into the history of philosophy rests on two pillars: the craft of studying historical sources and the philosophical analysis of these sources. ‘In my opinion, the combination of these activities is both fascinating and fruitful. I enjoy studying sources as this allows you to find new texts or shed new light on familiar ones. The result is often a new, more nuanced view of how thought has evolved. But source study alone is not enough; it must be combined with an analysis of the philosophical issues raised in those texts. You therefore continuously enter into a dialogue with the thinkers who have shaped our traditions.’

New view on the role of humanist critique

Nauta’s research focuses on the changes that have occurred in the intellectual and cultural history of Europe. He has made significant contributions to the study of what is referred to as the twelfth-century renaissance. He has also shed new light on the relationship between religion and philosophy in the work of seventeenth-century philosopher Thomas Hobbes. In his book about humanist Lorenzo Valla, Nauta presents a new view on the great importance of the critique of humanist thinkers for the medieval scholastic world view. ‘My research shows that the humanist critique contributed significantly to the rise of the modern world view.’

Besides the great honour, the winner of the Spinoza Prize receives a research budget of EUR 2.5 million. Over time, and in part thanks to his receiving VIDI and VICI subsidies, Nauta has surrounded himself with a substantial number of PhD students and post-doctoral researchers. The prize will allow him to establish a new research group that can conduct large-scale research projects, at least by the standards of the humanities. ‘This opens up a whole range of opportunities: we can attract top researchers, start a new research group and, something I would love to do, compose a team to write a good handbook on the history of philosophy. All of this is now within reach, and I am looking forward to it tremendously.’ 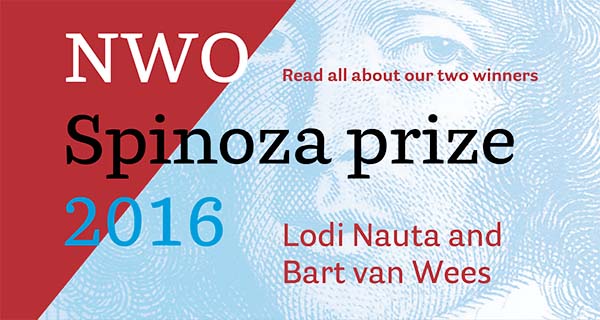