Towards a ‘weather forecast’ for permafrost

A group of fifty researchers and as many tourists led by Maarten Loonen of the
Arctic Centre of the UG is currently sailing around the island of Edgeøya on
Spitsbergen. This second Scientific Expedition Edgeøya Svalbard (SEES) aims to
gather information about the changing climate and environment in the Arctic region.

The scientific team includes two researchers from Medusa. This company was established in 2000 as a spin-off of the KVI Center for Advanced Radiation
Technology , or the kernfysisch versnellerinstituut as it was called at the time, of the UG, led by the late Professor of Nuclear Physics, Rob de Meijer. While other researchers on Edgeøya are busy studying plants, fungi, or old reindeer bones,
Medusa’s geophysical field researcher Wouter Rooke traverses in resolute straight lines between them in his vehicle, to which a little single-wheeled trolley is attached. At the front of the trolley, a radar head is only separated from the ground by a plastic container that protects the expensive equipment from the sometimes wet or rocky soil. Rooke is using the radar to search for permafrost, the permanently frozen soil that is disappearing in increasing numbers of places in the rapidly warming Arctic region as a consequence of climate change.

From ice to rock

In an initial measurement of a few hundred metres between the foot of a hill and
the bed of a small melt water river, the radar signal already reflects back from the
permafrost to the trolley at a depth of 20 cm (the red line in the below fragment of
a measurement). The signals that manage to get through the ice hit a layer of
loose rocks about a metre further down (the green line). Another half a metre
deeper down, the radar signals are definitively stopped by the rocky bottom (the
blue line in the profile). Closer to the river, the permafrost is lot deeper – no ice is
found until a metre down from the sandy ground (red indicates shallow
permafrost in the satellite image; blue indicates where the ice is deepest down).

The permafrost characterizes the landscape of Spitsbergen. The melt water from glaciers and snowfields is of course unable to permeate it, so that in many places fertile soil forms a boggy layer with fluffy bog mosses and pink ‘compass plants’, which grow in the shape of a little ball and first start blooming on the south side.
Despite the permanent daylight above the Arctic Circle this time of year, the sun still shines most strongly in the southern sky, so the flowers benefit from the sun rays on that side first.

Medusa’s soil researcher Koos de Vries is not yet sure why the permafrost is so
much deeper near the river than at the foot of the rocky hill. ‘How the soil freezes
and defrosts depends on many factors, including the amount of loose soil or rocks, which absorb more or less warmth from the sun, the amount of moisture, the orientation towards the sun, the angle…
’However, even though there is no definitive explanation yet, the consequences are already known. The more deeply the permafrost withdraws, the more CO 2  and methane are released, and the more organic matter can also be converted into new methane by bacteria in the boggy soil. Methane is a greenhouse gas that is dozens of times stronger than CO 2 per molecule.
‘Our measurements ultimately aim to contribute to models that can explain, and
perhaps even predict, the behaviour of permafrost’, De Vries explains. ‘You could
say that we are trying to help create to a sort of ‘weather forecast’ for permafrost,
which can be used to gain a better understanding of the expected effects of
climate change on the soil.’

This is the second article in a series about the SEES expedition. The first one was about disappearing sea ice and polar bears. 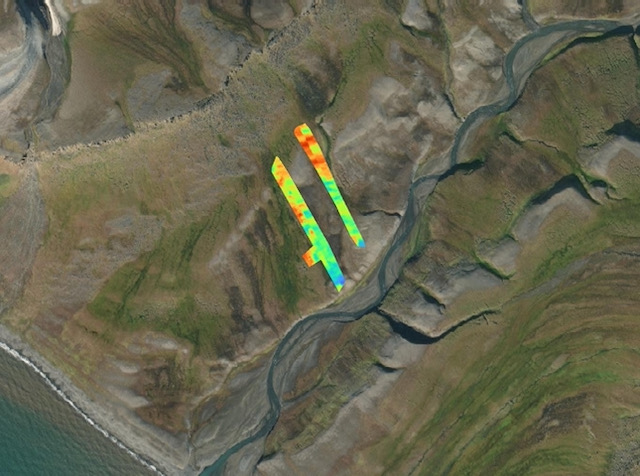