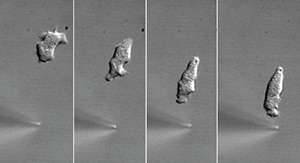 How white blood cells in our immune systems home in on and engulf bacterial invaders has long been a mystery to scientists.

But biologists from UC San Diego and the University of Groningen in the Netherlands have uncovered important clues about this mechanism from an organism commonly encountered in soil, but often unnoticed: the slime mold Dictyostelium discoideum.

The scientists report in this week’s issue of the journal Developmental Cell that the key to the directional ability of this microscopic organism, affectionately known to biologists as “Dicty,” is a protein that when activated by chemicals secreted by bacteria allows the slime mold to home in on and feed on bacteria living in soil.

“Like white blood cells, Dicty has the ability to distinguish and respond differently to a variety of chemical cues, and a sense of direction,” said Richard Firtel, a professor of biology at UC San Diego who co-headed the research collaboration with Arjan Kortholt from the University of Groningen. “When a white blood cell encounters a chemical signal, the chemical binds to proteins, called receptors, on the surface of the white blood cell. These receptors are evenly distributed over the surface of the cell, but the cell has a remarkable ability to identify the type of chemical and the direction from which it originated.”

Sequential images, from left to right, of a Dictyostelium cell migrating towards a chemical cue emitted from the needle. Photos by Susan Lee, UC San Diego