Biochemists at the University of Zurich have used cryo-electron microscopy to determine the detailed architecture of the chloride channel TMEM16A. This protein is a promising target for the development of effective drugs to treat cystic fibrosis. 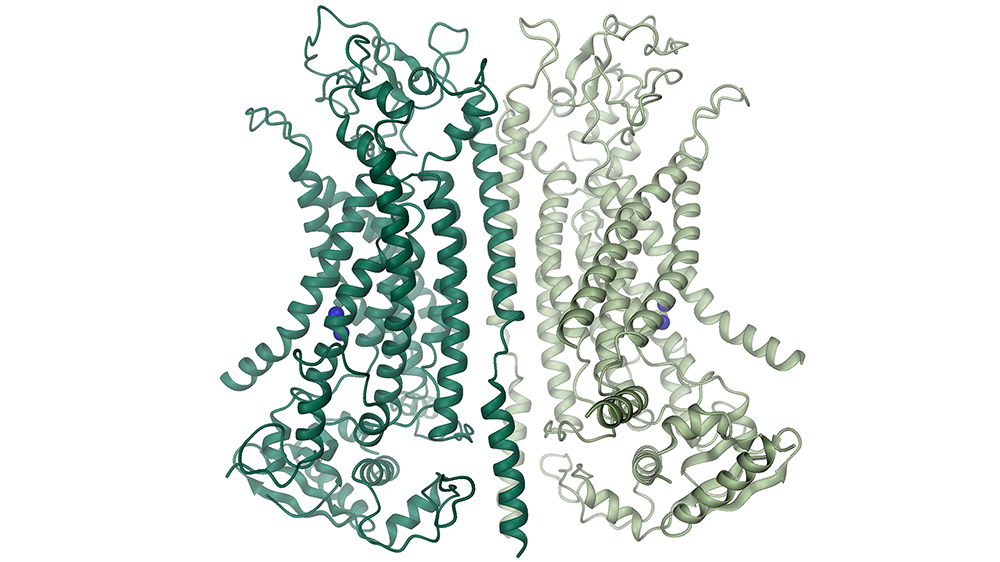 Cystic fibrosis is a severe hereditary disease of the lung, for which there is currently no cure. The underlying cause of the disease is a malfunction of the chloride channel CFTR, which prevents the secretion of chloride in certain body cells. This leads to dehydration of the mucus layer in the lung. A promising approach for treating cystic fibrosis is the activation of the calcium-activated chloride channel TMEM16A as an alternative route for chloride efflux. Since TMEM16A is expressed in the same epithelium as CFTR, its activation could restore hydration of the mucus layer. TMEM16A is part of a protein family whose members facilitate the flow of negatively charged chloride ions or lipids across the cell membrane.

Structure of a chloride channel determined

The structure of a TMEM16 scramblase, which functions as a lipid transporter and plays an important role in blood coagulation, was already known from previous work. Researchers of the Department of Biochemistry at the University of Zurich have now also succeeded in decrypting the structure of the chloride channel TMEM16A. To do so, the team led by Professor Raimund Dutzler used cryo-electron microscopy (cryo-EM), a technique whose pioneers were recently awarded the Nobel Prize in Chemistry. “The molecular architecture of this membrane protein is crucial for the targeted development of drugs for treating cystic fibrosis,” emphasizes Dutzler.

Discovery of a novel activation mechanism

The chloride channel TMEM16A can be found in different organs of the body and plays a key role in the secretion of chloride in the lung, the contraction of smooth muscles, and the perception of pain. How its structure differs from closely related scramblases of the same family and how the protein is activated by calcium was now revealed through a combination of cryo-EM and electrophysiology. While its general architecture resembles scramblases of the same family, there are distinct differences in the pore region located in each subunit of the dimeric protein. Scramblases contain a membrane-exposed polar furrow, which allows for the diffusion of lipid headgroups across the lipid bilayer. In contrast, at the same location, TMEM16A forms an hourglass-shaped protein-enclosed channel, which is closed in the absence of calcium. The binding of positively charged calcium ions in its vicinity opens the channel and allows negatively charged chloride ions to permeate across the membrane. “This activation mechanism is unique, since the bound calcium ions directly change the structure and electrostatics of the ion permeation pore,” explains Cristina Paulino, lead author of the study.

Paving the way for novel therapies

The findings that describe the structure and function of TMEM16A pave the way for a mechanistic understanding of this important family of membrane proteins, and they provide a promising template for developing drugs for the treatment of cystic fibrosis. “Substances leading to the activation of the TMEM16A would compensate the defect in the secretion of chloride ions in the lung,” states Raimund Dutzler.