University of Groningen scientists, led by Associate Professor of Chemical Biology Giovanni Maglia, have designed a nanopore system that is capable of measuring different metabolites simultaneously in a variety of biological fluids, all in a matter of seconds. The electrical output signal is easily integrated into electronic devices for home diagnostics. The results were published in Nature Communications.

Measuring many metabolites or drugs in the body is complicated and time-consuming, and real-time monitoring is not usually possible. The ionic currents that pass through individual nanopores are emerging as a promising alternative to standard biochemical analysis. Nanopores are already integrated into portable devices to determine DNA sequences. 'But it is basically impossible to use these nanopores to specifically identify small molecules in a complex biological sample', says Maglia. 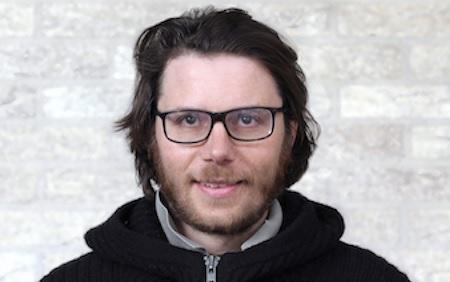 A year ago (1), Maglia demonstrated how to use nanopores to identify the 'fingerprints' of proteins and peptides, and even to distinguish polypeptides which differ by one amino acid. Now, he has adapted this system to identify small molecules in biological fluids. To do so, he used a larger cylindrical-shaped nanopore to which he added substrate-binding proteins. 'Bacteria make hundreds of these proteins to bind substrates in order to transport them into the cells. These proteins have specificities that have evolved over billions of years.'

Maglia adapts the binding proteins to fit inside the nanopore. If a protein then binds to its substrate, it changes its conformation. This, in turn, changes the current passing through the pore. 'We are using the binding protein as an electrical transducer to detect the single molecules of the substrate', explains Maglia. The pores can be incorporated into a standard device which analyzes the current of hundreds of individual pores simultaneously. To this end, the scientists are working with Oxford Nanopores, the world leader in this kind of technology. 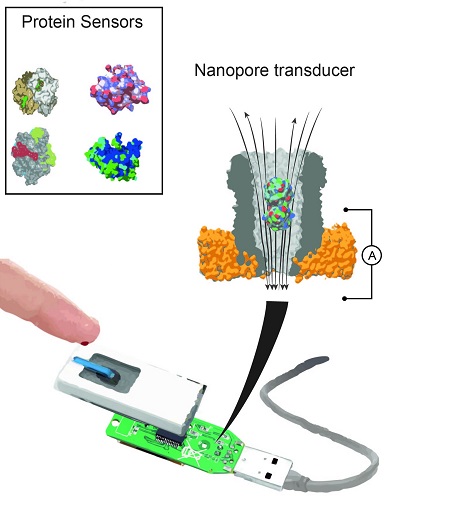 A nanopore device can contain different binding proteins. Once inside the pore, these proteins act as transducers to identify specific small molecules in a sample of body fluid. | Illustration G. Maglia, University of Groningen

By adding two different substrate-binding proteins that are specific to glucose and the amino acid asparagine, Maglia was able to get a reading for both from a fraction of a single drop of blood in under a minute. 'Real-time glucose sensors are available, but the asparagine analysis normally takes days,' he says. Maglia's method works with blood, sweat, urine or any other bodily fluid, without needing sample preparation. The substrate-binding proteins are on one side of the membrane and the sample is on the other. 'As the pores are very narrow, the mixing only happens inside the nanopore, so the system can operate continuously,' he explains.

The challenge now is to identify suitable binding proteins for more substrates, including drugs. Maglia's group has found ten so far. 'But they need to be tuned to work with the pore. And at the moment, we don't really understand the mechanism for this, so finding the right proteins is a matter of trial and error,' he says. Maglia is looking for opportunities to set up a company which will provide these binding proteins. 'If we can create a system with proteins that are specific to hundreds of different metabolites, we will have created a truly disruptive new technology for medical diagnostics.'